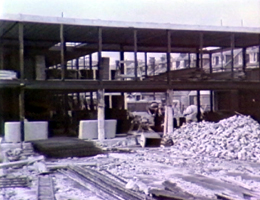 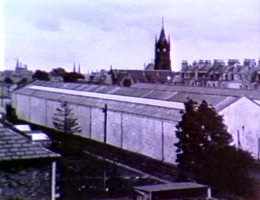 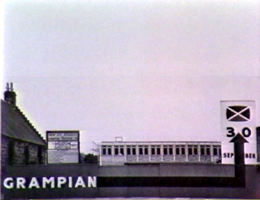 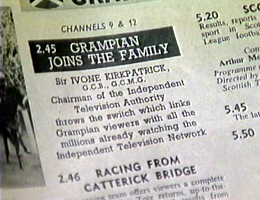 The ITV region in the North of Scotland was established in 1961 with VHF transmitters serving the areas around Aberdeen and Inverness. Grampian Television won the contract in 1960.

The Grampian story began in a granite built tram depot in the westend of Aberdeen. Humble beginings for what was to be an industry pushing forward the frontiers of technology.

The BBC with it’s monopoly of the air in sound and vision was firmly entrenched but Britain’s newest independent television station was set to change that.

As viewers in the North East of Scotland scanned their first edition of the Grampian TV Times on Saturday the 30th of September 1961. At 2.45 pm Sir Ivone Kirkpatrick Chairman of the Independent Television Authority threw the switch and welcomed Grampian viewers to the Independent Television Network. Grampian was on air and their first programme at 2.46 pm was Racing From Catterick Bridge.

UHF transmitters in the north-east began in 1971 and the transmitter building programme continued until coverage extended across northern Scotland to the Orkneys and Shetlands, the Western isles and parts of the west coast northwards from the isle of Skye.

By 1979 there were eight main UHF transmitters, thirty-six UHF relay stations and five VHF stations. As one of the smallest ITV regions in the number of viewers, geographically, it became the largest – stretching some 200 miles from Aberdeen in the east to the Isle of Lewis in the west, and some 400 miles from the Shetlands in the north to Fife in the south. Aberdeen, Inverness and Perth were the major centres of the population. In the specifications by the IBA, this contract area from 1982, the enlarged coverage was recognised in a change of name from North-East Scotland to North Scotland.

Among the noteworthy features of Grampian’s output was the way it reflected the life of North Scotland. As the financial position improved during the 1970’s, priority was given nevertheless to expanding news and current affairs coverage, particularly from Dundee and Inverness. Grampian pioneered the concept of subsidiary studios with cameras equipment remotely controlled from headquarters in Aberdeen.

‘Flare up Shetland’, shown in September 1972, was Grampian’s first oil documentary. So great was local interest and involvement in the oil phenomenon, that a series of hour-long debates followed at peak viewing times that autumn, when Grampian moved into colour production. ‘What Price Oil?’ was launched, the series was presented by the then Head Of News, Charles Smith and won an award for the programme having done most to promote the understanding of trade industry. Later developments in the news department equipped the company to become a valuable supplier to ITN, and coverage of the disaster in the Ekofisk field in April 1977 was a world scoop, screened in 107 countries. This was to be followed by a networked documentary, ‘Blow Out at Bravo’. 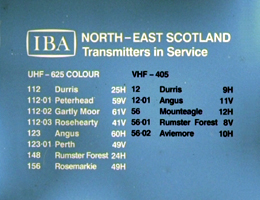 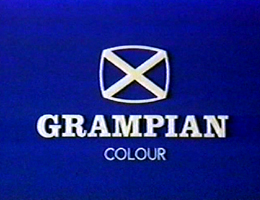 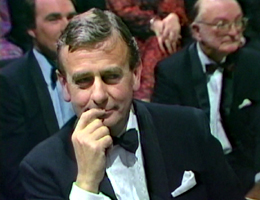 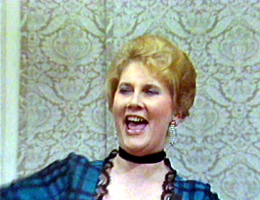 In 1978, Grampian became the first company in mainland Britain to introduce ENG (Electronic News Gathering) units at its three centres in Aberdeen, Dundee and Inverness. Grampian was also the first small regional company to have its own outside broadcast unit, initially built by its own engineers and using the same cameras as the main studio. Designed originally for football coverage, the unit was soon in use for church services and entertainment programmes as well.

The most significant event affecting the company’s programme policy and financial well-being during this period, was the discovery and development of North sea oil. Nearly all the major fields were off the coast of Grampian’s region and, as Europe’s off shore oil capital, Aberdeen suddenly became a “boomtown”. The impact of the oil industry affected every aspect of life – housing communications and public services commerce, industry and employment.

All of this came to be reflected in Grampian’s news programmes, News and Views – Wednesday File, Grampian Week, and Grampian News. By 1978 Grampian Today the nightly news magazine programme was launched five nights a week by that time Grampian was transmitting to the north and north east of Scotland the programme name had to change to reflect true coverage of the region. North Tonight was born in 1980 and Presented by Selina Scott and John Duncanson. 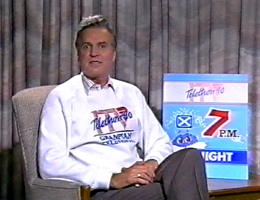 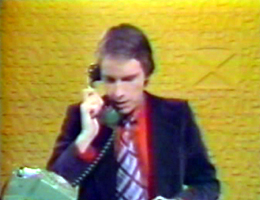 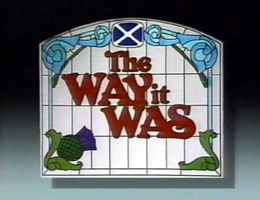 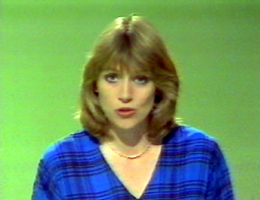 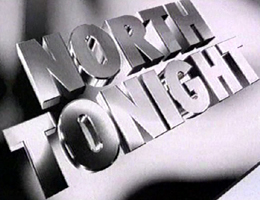 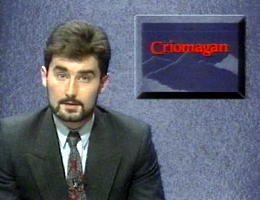 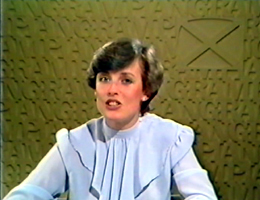 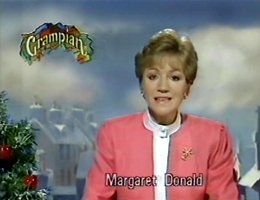 The extension of Transmitter coverage to include Gaelic-speaking areas called for the allocation of some of the company’s resources to the production of programmes in that language. A weekly Gaelic news ‘Seven Days’ was launched and presented by Angus Peter Campbell and a regular Saturday morning favourite for children, Cuir Car were the contributions to the survival of the culture. Of a wider appeal and screened by other ITV companies, were programmes in the ‘About Britain’ series ‘The Electric Theatre Show’, ‘The Entertainers’, ‘Andy’s Party’, ‘Welcome to the Celidh’ and the popular dressmaking series called ‘Simply Sewing’. Grampian reapplied and was successful with the application for the north of Scotland franchise in 1981 the IBA had not proposed any changes for the franchise. Grampian did not plan many changes for the application as the formula they had was suitable for the region. A consortium of groups who were also unsuccessful in a bid for independent radio in Aberdeen contested the Grampian franchise.

By 1983 Grampian had completed a £3.78 million building and equipping project at it’s Aberdeen studios this marked the completion of a £5.25 million investment programme to improve Grampian’s service to North Scotland and equip the station for the opportunities expected to arise as broadcasting channels proliferate throught the decade. The heart of the new development was the central technical area which housed £2 million pounds of new equipment and represented a significant change in operational procedures with remote controlled facilities dedicated to either production or transmission of programmes and commercials in “off line” and “on line” areas. Station announcers moved into a new continuity suite which had a choice of sets and facilities for improved lighting and backgrounds.

Grampian TV had rivals bidding for it’s franchise from 1993 apart from Grampian the ITC recieved applications from C3 Caledonia headed by former Grampian Continuity Announcer Jack Mclaughlin. North of Scotland TV was headed by former Grampian Continuity Announcer Anne Duguid. Grampian promised a new studio at Stornoway and increased Gaelic broadcasting including a six-minute news bulletin five times a week if they held on to their thirty year franchise. The financial bid was not the highest possible but a realistic one that would allow them to provide a quality service, and a good return for shareholders. Grampian knew the ITC were interested in quality and regionalism and were confident they would come out on top.

By August 1997 Scottish Media Group merged with Grampian Television. The year 1998 promised to be one of the most interesting in Grampian Television’s 37-year history as the Aberdeen based station continued to settle in to the Scottish Media Group. By August SMG restructured it’s broadcasting division this was the end of an era for the Grampian region with the disappearence of invision continuity announcers, programme links were to be made from SMG headquarters in Glasgow out of vision. 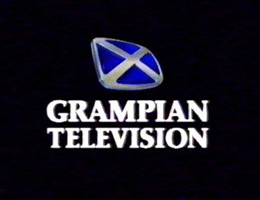 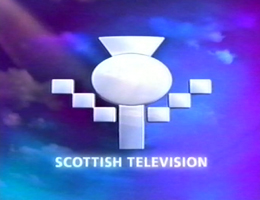 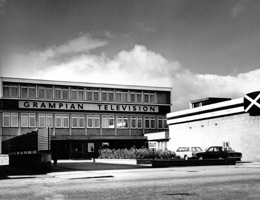 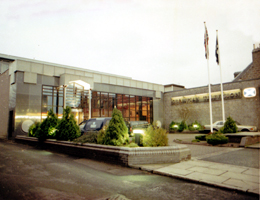 On Friday June 27th 2003. Grampian broadcast it’s last programmes from the Queens Cross studios, North Tonight bowed out with a final tribute to the studios and took a look at some of the “Weel Kent Faces” that had graced Grampian screens for over four decades. The late Grampian Headlines was the last programme to be broadcast from Queens Cross and was Presented by Norman Macleod. Grampian Television left it’s home of forty two years at Queens Cross and moved to a new £5 million television centre at Craigshaw business park in the Tullos area of Aberdeen. Derrick Thomson Managing Director said: “We’ve been in the same building for 40 years and although we looked at converting the current facilities it was decided it was unfeasible. The centre will have a 1,200 sq ft digital studio and a digital newsroom with desktop editing facilities for journalists. “Outside broadcast facilities will still remain an important part of Grampian’s coverage.

All news bulletins and North Tonight had been given a new look for the big launch from the new studios at Tullos on Monday 30th June2003. Grampian continued to broadcast a strong line up of regional programmes including Cop College, Off The Wall, Spend Spend Spend, You Have to Do This, and Medics Of The Glen, which was broadcast on the ITV network.

It was the end of an era on May 30th 2006. Grampian Television was rebranded as STV. Grampian had broadcast in the north of Scotland since September 30th 1961 the station served the largest transmission area in the ITV network and covered just over one million viewers. 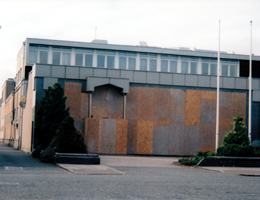 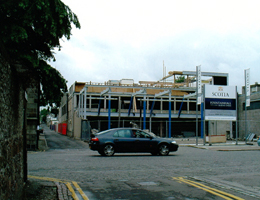 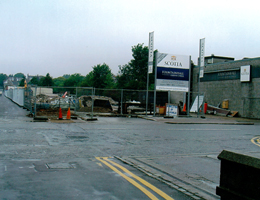 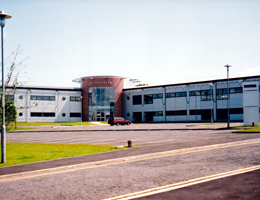 If you have any comments about the Grampian Television Website please get in touch.

The Grampian Television Studios Website has no official connection with Grampian TV or STV. The site is a non profit making project and is for educational purposes only.
The material on the site is the copyright of STV and we will comply with requests to remove anything which is offensive to STV and anyone featured on the site.